New York has a charming new ambassador for tourism... 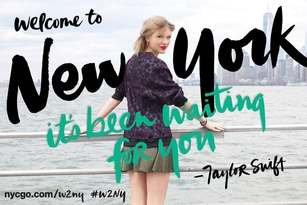 Tuesday December 16, 2014
And she’ll be headlining the biggest party of the year in Times Square!

NYC & Company, the organization that promotes tourism in New York City, has chosen Taylor Swift as the Big Apple’s newest ambassador, hoping that her star power will help them surpass 55 million visitors to the city. Taylor Swift has also signed on to perform for the million revelers expected in Times Square on December 31st to ring in 2015! If you want to be a part of fun, we have two trips available for you: either a three day package with a New Jersey hotel, or if you prefer to extend the festivities, a four day package with a New Jersey hotel. Here’s why, according to Taylor Swift, New York City is unlike anywhere else in the world:http://www.nycgo.com/w2ny/.  Plus, she’s got a new song, “Welcome to New York,” which endorses the Big Apple with a simple message for tourists – “New York - it’s been waiting for you!” Watch the video here: http://www.nycgo.com/w2ny#welcome-to-new-york