Montreal or New York? Who has the best bagels? 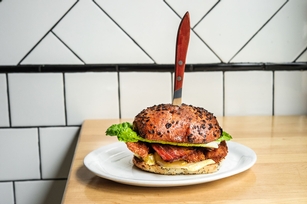 The debate has been going for years now. Which city has the best bagels? Montreal? New York? Us too, we’ve been struggling with the answer… But after a couple of arguments here and there, live debates left and right, a few tears and heartfelt testimonies, we have found a golden mean to this arduous debate:  New York’s Mile End Deli has officially settle the argument!

This Canadian tailored restaurant mixed with Jewish delicacies, has been taking over the United States since 2010 and their Montreal-style bagels are to die for . So while you’re enjoying New York City’s marvelous landmarks you can nibble on some fresh Montreal-comfort food 590 kilometers away from home! Oh, but that’s not it! Based on the owners’ grandmothers’ traditional recipes, this restaurant also serves signature smoked meats and sandwiches, homemade hotdogs with tangy kraut, poutine, fresh whitefish salad and so much more! We recommend the restaurant located in Brooklyn, but they also have an outpost in Nashville, and soon, in Birmingham, Alabama!

So you know what the next step is now, book a trip to New York A.S.A.P and let us know if we were right by highlighting this deli has the perfect middle! https://www.frenzytours.com/1-trips/new-york.html