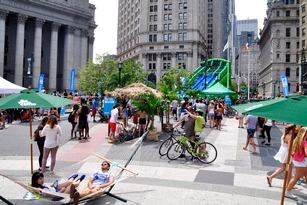 Monday July 29, 2019
Browse the city of New York without worrying about cars!

They say that the world is your playground... Well, New York City took it quite literally!

Over the course of three consecutive Saturdays in August, between the hours of 7 am and 1 pm, New York City will ban the access to cars to let the public play, run, walk and bike freely in the middle of the streets!

Summer Streets is an annual initiative from the city to encourage New Yorkers to play outside and to use public transport instead of their cars that has attracted more than 300,000 in 2018!

Plus, on Saturday August 3, citizens are invited to join yoga pioneer and physical therapist Lara Heimann in an attempt at breaking the Guinness Book of World Records of 399 people doing a handstand at the same time!

Basically, this is a time for people to enjoy New York City to its full potential without worrying about crossing the streets and waiting for the green light!

And trust me, given how the city is always crammed with taxis and cars, this event will give you a certain piece of mind!

Want to join the fun? Click right here to learn more on our sweet getaways to the big apple! We have departures every weekend, and yes there is one this Friday!