Times Square is about to celebrate the end of a great year! 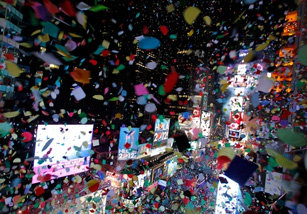 Monday November 26, 2012
Each year thousands of tourists gather in Times Square on December 31.

In 1904, two major events would forever transform New York; the opening of the first subway line, which ran from City Hall to 145th Street, and the first New Year’s Eve celebration in Times Square! The owner of The New York Times, Alfred Ochs, wanted to celebrate the opening of the new headquarters with fireworks at the stroke of midnight, and the event was so successful that it replaced the previous venue, the Trinity Church in Lower Manhattan (the oldest parish of the island) as the spot to celebrate the New Year. Two years later, the city banned fireworks and so the famous Times Square Ball appeared ... If you want to join the crowd and join in the celebrations, you should dress warmly and arrive before 2:00pm on December 31, in order to make the most of the entertainment before the confetti! Everything you need to know to prepare for the big day is on Times Square’s official website: http://www.timessquarenyc.org/new-years-eve/index.aspx