Will you take part in the biggest party of the year? 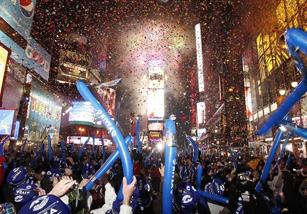 Monday December 3, 2012
Around one million people are expected in Times Square and its surrounding streets on the eve of December 31st.

To celebrate the year 2000, two million people filled Times Square and its surrounding areas. We hadn’t seen so many people gathered there since the end of World War II in 1945! Since then, year after year, about one million celebrators from Montreal and around the world, come to welcome in the new year, and now, you can do it in the company of Taylor Swift and many other famous artists, not to mention balloons, confetti, cheerleaders and fireworks, all in a safe and festive atmosphere. One billion people will be glued to their television screens as they watch the festivities, and performances live from Times Square on New Year’s Eve, but why watch on TV when you could be there experiencing it with Frenzy Tours, which offers departures to the Big Apple on the 29th and 30th of December. And most importantly, the biggest party of the year is free! Admit that it's tempting ... To learn more about the celebrations in Times Square, please visit the following website: http://gonyc.about.com/od/newyearseve/a/nye_ball_drop.htm