Are you sure you know ALL there is to know about the holiday season in New York. 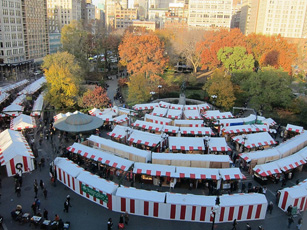 Monday December 24, 2012
Aside from classic landmarks such as Macy’s, the Rockefeller Center and Times Square, to name a few, there are many other discoveries to be made in the Big Apple!

Why not visit the Christmas markets outside of Bryant Park, Columbus Circle and Union Square? It’s a feast for the eyes and stomach. Who wouldn’t like to enjoy watching the lights dance in the World Financial Center’s magnificent winter garden (facing the World Trade Center) or in the Time Warner Center (facing the Columbus Circle holiday market)? How can you not get swept away by the amazing architecture in Grand Central Station, the most beautiful train station in New York, with its Christmas market in the Vanderbilt lobby and its spectacular model railway in the New York Transit Museum (with free admission)? If you’d like to discover all of these wonders, know that there are only a few spots left on the departures to New York for the 29th and 30th of December. And after a well deserved two month break, Frenzy Tours will be back with its numerous packages as of March 1st with departures every weekend until the end of 2013. Happy Holidays on behalf of the entire Frenzy Tours team!