Frenzy Tours celebrates its 10 years with a bang! 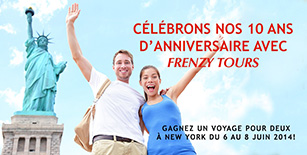 Monday March 10, 2014
For its 10th anniversary, Frenzy Tours is giving away a trip for two to New York.

For 10 years, Frenzy Tours has come a long way, from New York to Chicago, passing by Boston, Niagara, Toronto, Philadelphia and Washington! Furthermore we have gone from a few departures per year to departures every week end to New York, during the month of March until December! To celebrate its 10th anniversary of sporting events, of discoveries and shopping in your company, we have decided to offer a trip for two in the Big Apple, New York City, from the 6th to the 8th of June 2014! This gift package offers all of the inclusions which make our mark of commerce, without mentioning 2 nights in Manhattan in a hotel of superior quality, which is easy to access via the public transportation, from Times Square; should you wish to be able to benefit at the maximum of your stay of the city which never sleeps... To know more about how to participate to our 10th anniversary contest, make your way quickly to our Frenzy Tours facebook page at https://www.facebook.com/FrenzyTours/app_192229990808929