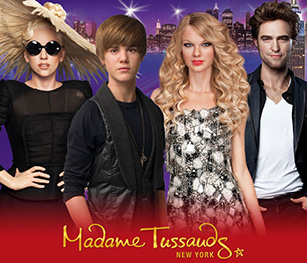 Madame Tussaud’s wax museum counts seven branches in the world; the one located in London is the most famous one. In New York, Times Square you will be welcomed by a life like representation of the actor Samuel L. Jackson. The exposition is three stories high and is one of New York's most popular attractions. You will be welcomed  by Brad Pitt and Angelina Jolie, who are a couple meters away from Jennifer Aniston! You will be able to see and get your picture taken in company with a whole host of celebrities, political figures and athletes such as Oprah Winfrey, Harrison Ford, Robin Williams, Fidel Castro, Yasser Arafat, Napoléon Bonaparte, Nelson Mandela, George W. Bush, Elton John, Madonna, Muhammad Ali, Mick Jagger, Michael Jackson, Wayne Gretzky, ect.